MCKINNEY, Texas (October 12, 2021) – TUPPS Brewery, one of the top 10 independently-owned craft breweries in the state of Texas, expands its innovative portfolio of beers to the city of Houston this month. Since opening its doors in 2015, TUPPS has grown at an exponential rate throughout North Texas, Austin, San Antonio, East Texas, West Texas including El Paso, Lubbock, Abilene and Amarillo as well as into Oklahoma. Adding Houston to its distribution list is just the next step in accomplishing the company’s goal of providing the best tasting, quality beer to the entire state of Texas.

“In 2017 we expanded to the Austin market and were impressed how our beer sold outside our home market of North Texas. We always had our eye on Houston, but needed to expand our production capabilities to service this market. We wanted to make sure we could support Houston the proper way.” says Keith Lewis, TUPPS Brewery Founder and President. 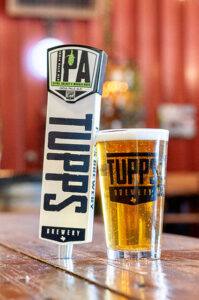 As the business has grown, TUPPS Brewery has invested in expansion capabilities which has allowed them to expand into Houston. In 2022, TUPPS Brewery will be moving locations into a 4-acre property with a brand-new brewery production facility. This expansion will allow TUPPS Brewery to distribute to the entire state of Texas.

“We’re incredibly grateful and excited to be partnering with Silver Eagle Houston. They have a great team and a ton of enthusiasm for our brands. We’ll be starting by launching draft of our core line up of IPA, Alpha Drop, our double dry hopped IPA, Juice Pack, our double dry hopped pale ale, and our fruited sour, Neon Shade,” says Chase Lewis, Vice President of Sales and Finance. “We’ll follow the draft launch with a package launch in the spring.”

“Silver Eagle Houston is thrilled to introduce this North Texas craft brand to the Houston-area with a stellar lineup of quality craft beer,” said Tom Montague, sales vice president of Silver Eagle Houston. “Beer advocates in Houston are always on the lookout for a great Texas beers.”

TUPPS will partner with multiple bars and restaurants in the Houston areas and throw launch parties where you can meet the head brewer, Chris Lewis, taste multiple offerings from TUPPS Brewery, and even win some cool raffle prizes.
You can expect to see TUPPS Brewery cans in all major Houston retailers beginning in April 2022.

ABOUT TUPPS BREWERY:
TUPPS Brewery is a McKinney, TX based, independently owned craft brewery founded by Keith Lewis in 2015. As reported by the Texas Craft Brewers Association, TUPPS is the 16th largest craft brewery in the state out of 341. TUPPS award-winning lineup of beers include, TUPPS IPA, Juice Pack, Neon Shades, and National Standard, as well as seasonal powerhouses like the Full Grown Man series, Day of the Dead, and Oktoberfest. TUPPS also produces Blur Hard Craft Seltzer, which offers four different flavors in a 12-variety pack. TUPPS Brewery’s taproom is open during the week nights and on weekends. For current hours, please visit the TUPPS Brewery website. TUPPS Brewery sells Beer-To-Go from the brewery including: 4/6 packs, 32oz crowlers and 64oz growler. Orders can be placed online in advance for an easy, quick curbside pickup.